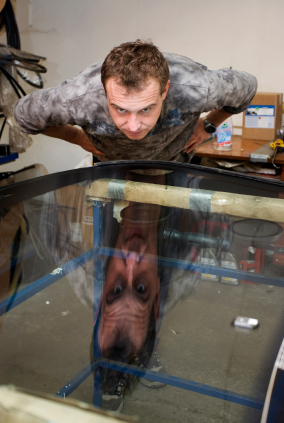 A mass hysteria developed as more and more Seattleites found these tiny scars on their vehicles. A pockmark plague scoured the Northwest.

Two theories emerged as the cause of these indentations.

The panic grew. The Federal government sent a team of experts to investigate the mystery.

They discovered that there was not an increase in Seattleites’ windshield dimples. Rather as more people heard of reports of these unexplained windshield nicks, more people checked their own cars.

Most people did this by looking at their windshield glass from the outside instead of from the inside of their cars. What Seattleites saw was caused by normal wear and tear on a windshield.

The outbreak in Seattle was not an epidemic of windshield pitting. It was widespread, prevalent rampage of reverse windshield viewing. People reversed their view of the windshield and discovered something that had always been there but never noticed.

Moral: This is a story of what happens when people reverse their point of view. Roasting conventional thinking and doing things the opposite from the traditional way allows for new discoveries.

The next time you gaze at a gorgeous sunset, turn around to see the blues and violets behind you. As you pour your next cup of coffee, instead of gazing at the color of the mug, its design and material, reverse your focus. Look at the empty space inside the cup. That’s what gives the mug its functional value.

For Conference, Event And Tradeshow Organizers
The next time you start planning a meeting, conference or event, try switching your objective. Instead of seeing the meeting room and wondering which room layout is best for the most people to sit in a session, visualize the room as full of people. Ask yourself, “How can I get these people out of their chairs and engaging with each other instead of sitting passively?” Your answer might be an entirely different way to create a room layout. And it may unsettle your attendees and get them out-of-synch, which is a good thing because it becomes unpredictable. Unpredictability leads to new experiences and more memorable events.

The next time you set a room theater style with the intent of everyone looking at the head of the person in front of them, facing the stage, as they watch a presenter, think about how to get the audience to look into the eyes of the other attendees. Reverse your intentions and strategize on the best room layout for people to connect with each other, not just connect with the presenter. Then let the presenter become the guide on the side instead of the sage on the stage.

The next time you start planning a meeting and find yourself calculating the number of gallons of coffee that you need and the number of chairs that must be set, switch your perspective. Instead of focusing on the details of the event first, start thinking about the goals of the program. Think about how you can become more effective with the content and the messages of the event. Reflect on how your logistics can augment the meeting’s substance.

Reversing your perspective and roasting conventional thinking is a great way to sharpen new skills. You may find that the opposite view makes more sense.

Think about some common sense conference tactics you usually take. Identify one. Now roast it and shift your perspective. What did you learn? How has your focus shifted?

Please share some of your conference, event and tradeshow perspectives that you reversed. We’d like to hear from you.