It’s so dreamy, oh fantasy free me
So you can’t see me, no not at all
In another dimension, with voyeuristic intention
Well-secluded, I see all
With a bit of a mind flip
You’re there in the time slip
And nothing can ever be the same
You’re spaced out on sensation, like you’re under sedation
Let’s do the Time Warp again!

Take a step back into time with me. Let’s do the time warp again. “It’s a jump to the left. Then a step to the right.”

Let’s go back to the halls of one of the first education institutions, the university. Let’s say it’s Oxford or Cambridge or the Byzantine University. You decide.

Now, let’s walk down to biology labs. What do you see? If you’re like me, you’d probably laugh aloud or gasp at the sight of the 11th Century biology lab. It was a mix of astrological and religious influences, dead animals, potent chemical brews and intoxicating smells. It looks nothing like the biology labs of today’s high schools and universities. It’s antiquated and archaic. It looks and feels foreign to us.

Now, let’s continue our time warp field trip and move to one of the university’s standard classrooms used for history, math or English. Amazingly, not much has changed from today’s standard higher education classrooms. It’s not as antiquated or outdated.

This classroom feels very familiar and common. It’s home. There’s a podium at the front of the room for the professor to grasp. Chairs are arranged neatly in rows facing the lectern. We can just imagine students listening passively to the teacher while taking notes. The only difference is that there probably isn’t a screen for PowerPoint projection or a wireless lavaliere. 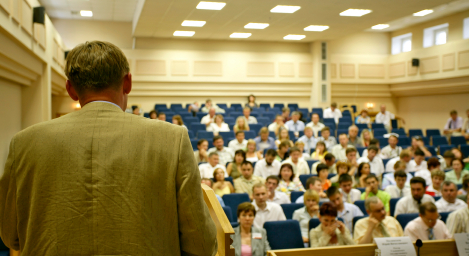 Now, let’s time warp forward to today and into a major convention center or hotel that’s holding an annual conference. Walk down the hallway and in to one of the sessions. It doesn’t look much different than the 11th Century university lecture hall. Besides the fact that the room may be carpeted and the chairs are covered in fabric, not much is different.

Could it be time for a change?

Why is it that with all the education advancements in how people learn we’ve not changed the way we deliver presentations? Why is it that with current neuroscience brain research and reports from major universities on how people learn in a digital age that we continue to promote ballroom presentations where attendees sit in nice rows, look at the back of each other’s heads and quietly passively listen? Why is it that smart conference planners, seat the audience in rounds or pods, but don’t require the presenters to incorporate small group interaction? Why is it that when research teaches us that listening is the least effective way to learn that we continue to make it the primary conference experience? Why is it that at some conferences, attendees learn more from hallway conversations than from sessions? Passive listening is certainly a great way to kill curiosity and the thirst for exploration.

Is it because the general sessions and breakouts with lecture based monologues are efficient and effective? Is it because it’s easy to steer people into large rooms like a cattle drive and compel them to sit quietly, listen and learn? Anyone that ever watched the Rocky Horror Picture Show in the theatres knows better than to just sit there passively. It’s about participation and engagement.

“With your hands on your hips. You bring your knees in tight. But it’s the pelvic thrust that really drives you insane, Let’s do the time warp again.” Jump forward into an annual conference of the future. What do you see? Is it still the 11th Century model? Or is it different?

Could it be time for a change? What do you think?