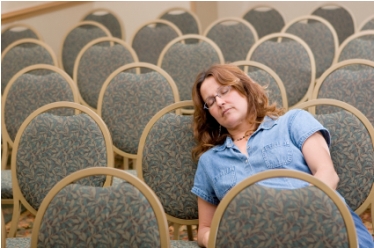 With apologies to Killing Me Softly With His Song composers Charles Fox and Norman Gimbel and singer Roberta Flack.

The Traditional Conference
We’ve all been there: the traditional four-day annual conference.

On day one, we attend the opening general session, three ninety-minute breakouts and a luncheon. Or some variation of that format. We may drop in on an evening reception to mix it up.

On day two, we realize that it feels like déjà vu. We suddenly begin to dread days three and four which are just repeats of Groundhog Day. Can we really attend more sessions that are killing us softly with their lectures?

The convention center’s rooms all look the same. Bland earth tones, obnoxious designs on the carpet so we can’t see the dirt, chairs set theatre facing a screen often locked together to encourage sitting in every other chair. Rarely do any of the conference rooms have windows or natural light.

Most of the sessions are lectures with text-heavy, boring PowerPoint slides magnified on the screen. After the two breakouts, each presenter starts to sound the same. Killing me softly with her lecture.

So how do we make these more engaging? More exciting? More memorable? Different than other conference experiences?

First, Why We Need To Provide A Better Way
Some interesting research about how we learn and our brains comes from the field of neuroscience. Brain researchers Dr. Marian Diamond and Dr. William Greenough have researched the importance of enriched environments on learning.

Diamond’s 1988 research showed that when she put rats in cages filled with games, puzzles, mirrors, colors, and textures, they grew more brain tissue. Their learning increased. When she put the rats into barren cages, their brains shrank.

Similarly Greenough discovered that rats in enriched environments had 25% more connections between brain neurons. Their learning increased and they performed better on tests.

Science writers Judith Hoper and Dick Teresi have documented additional researchers that have discovered that four days spent in enriched environments can lead to brain growth and increased learning. And four days spent in barren, non-enriched environments can lead to dendrite death. (Dendrites are the part of the neuron located in the brain that transfers information in the process of learning). Killing me softly with his lecture.

So what type of environments does your conference venue provide? Brain growth or dendrite death? Presentations that kill softly with lectures?

How To Provide The Conference Enriched Environment
Our minds learn from both traditional focused attention and from surrounding elements. Researchers have discovered that colors, decor, smells, sounds and other stimuli are process by the brain as well as the attention given to a specific activity. And they do influence the learner.

Conference organizers should take some cues from art installations and museum exhibits. They often use immersion environments rich in sensory cues.

Don’t know what an immersion environment is? Take a walk down the hall to your teenager’s bedroom. It typically resembles a whole new world, unrelated to the decor of the rest of the house. Or ask your child to show you their favorite video game. Most video games immerse players into other worlds often suspending natural rules and beliefs. Or think back to your childhood and how you used to immerse yourself into imaginary worlds.

1. Rich Social Interactions
Encouraging presenters to use a variety of attendee engagement techniques including individual structured note taking, discussions, and partnership, team and group activities. We learn better when we can interact in real-life contexts.

2. Engaging Emotions
Environments and presentations that engage and motivate the emotions, creating connections to people’s hearts and souls.

3. Visually Energizing
Charts, graphs, posters and signs on the walls with concrete vivid images. Venues could support this by providing a horizontal cork rail on some of the walls so presenters could hang information and signs. Uplighting with different bold colors sometimes helps the bland color palette.

4. Lush Sensory Inputs
Engaging as many of the attendees’ senses as possible evokes new reactions of novelty and curiosity. Providing walk in and out music to set the tone and state for the presentation. Providing unique smells such as peppermint, light florals, cinnamon and citrus which have been noted to increase the ability to learn, create and think. Bring in tactile games and puzzles for each table to allow attendees to play with during presentations.

5. A variety of seating options.
Some attendees are significantly affected positively or negatively, just based on the seating options. They need to have a choice from couches, beanbags, standing or sitting at cocktail tables, lounge chairs to traditional conference chairs. Providing small clusters of seating to allow attendees to connect and engage is best.

What changes can you make to your conference environment that will create enriched atmospheres?