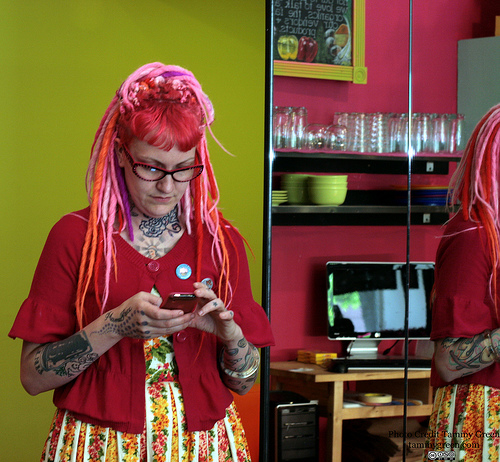 Synovate reports 82 percent of Americans never leave home without their mobile phones, while 42 percent say they cannot live without these devices. Roughly 4 billion people worldwide currently have mobile phones, and, according to one estimate, 70 percent of the world’s population will be carrying a mobile device by the end of this year, up from just 13 percent at the beginning of 2001. [Why The Future Of Associating Is Mobile, by Jeff De Cagna, TechnoScope Newsletter, ASAE. February 2010]

Both the Pew Internet Mobile and Synovate reports illustrate how mobile phones have become increasingly important in the digital debate about the digital divide. The Pew Research Center report concludes:

A. Mobile is a disruptive business model innovation opportunity for associations and tax-exempt organizations.

Mobile devices include smart phones, iPads and other tablet portable mobile devices. Association stakeholders increasingly manage their digital and personal lives via smartphones. The mobile device is often seen as our problem solving device, carried with us everywhere we go.

B. Mobile is reshaping our professional culture and practice in important ways.

Stanford University distributed iPads to all 2010 first year medical school and master’s of medicine students. The prevalence of mobile Wi-Fi devices has great implications for education and meetings. Mobile is inherently a social platform that offers membership organizations a new way to design new relationships with stakeholders.

1. Mobile First – users for who mobile is their primary access point to Internet
2. Mobile Lifestyle – users who love the conveniences of mobile services when they’re on the move
3. Addicted Devotees – users who are always on their smartphones even in Internet connected environments
4.  Social Animals – users who are particularly driven by social networking
Source: Erik Huggers, Our Mobile Future

Tip: Use Google Analytics to research how much traffic is coming to your association website via mobile devices.

F. The Future Of Associating Is Mobile

The 21st Century Association creates a complete mobile experience for its stakeholders. Mobile should challenge your association assumptions about value creating. Three areas associations should consider for mobile:

Two tools to use to check to see if your site is mobile ready:
Testiphone.com and ready.mobi

How is mobile affecting your delivery of information to your members? How are you addressing the need to be accessible to your members when they need to problem solve or leverage their membership resources?