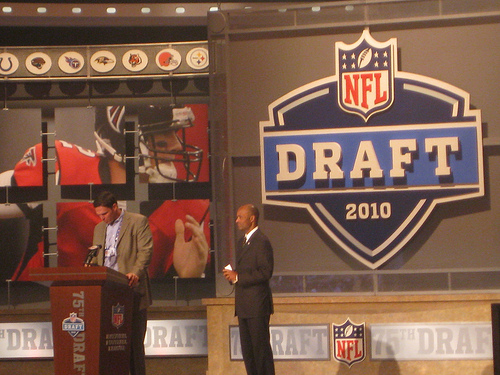 A couple of weeks ago, Kevin Johnstone, director of Tradeshows at the National Association of Music Manufacturers, started a LinkedIn discussion about priority point programs and on-site booth sales.

“Two benefits to holding your space pick for next year on,-site, is the competition factor between exhibitors which often results in increased sales. The other is the team aspect as many companies show up with multiple people, who seem to enjoy talking booth pick strategy among themselves and in turn often help create an NFL draft-like feel, which is upbeat and all about your show.”

The discussion really got me thinking.

Why don’t more shows do on-site booth sales for the next year’s show? How should priority point systems evolve to reward and incentivize the right behavior? What can show organizers do to maximize the opportunity and create an experience that’s memorable? How can organizers create more of a NFL draft-like feel with lots of energy, excitement and conversation in the sales process?

1. It accelerates booth sales and cash flow.
2. It provides a consultative opportunity and a chance to up-sell.
3. It helps build relationships with your biggest and best customers.

Why you need a priority points program?

1. It sets the table for an orderly and fair process.
2. It incentivizes and rewards loyalty.

As show business evolves with more revenue shifting from booth space to sponsorship and advertising, it’s important to design a program that rewards spend in all channels. Many show organizers give points for every thousand dollars of spend. Some organizers will also reward exhibiting companies for membership or donations to the foundation. The key is to give them multiple ways to earn points.

It’s important to reward the loyalty of those that have stuck with you for many years. Just how far back should you go? Do you ding a company for skipping a year or for downsizing? I don’t recommend loyalty systems that include penalties. Instead, consider having points with a five-year expiration date. Then you’re simplifying the system and rewarding loyalty based on the current value of the relationship.

A well planned loyalty program will incentivize behavior that is additive to your show. Consider rewarding exhibitors for helping market the show to their existing customers and prospects. Reward them for completing their online booth profile on time. You can also reward exhibitors for staying inside the contracted room block.

Once you have your priority point and loyalty program clearly identified and in place, it’s time to turn to your exhibit booth sales experience. The onsite selling environment, systems and experience really matter. You need to make it comfortable, easy, fast and personal. You need to treat everyone like a VIP at a NFL-draft experience! Remember, you want that NFL draft-hype. You need to break out the comfortable seating, your best china and put your real-time floorplan on the big HD screen.

For a personal touch, you might consider arming your sales team with iPads so they can work alongside their customers, instead of order taking behind a counter or desk. Having your sales staff equipped with iPads also allows them to visit the booths and provide guidance on the exhibitors’ turf.

Originally posted in TSNN.com and written by Dave Lutz.

What’s keeping you from selling your show 12 months out? How are you improving the on-site booth sales experience and results?