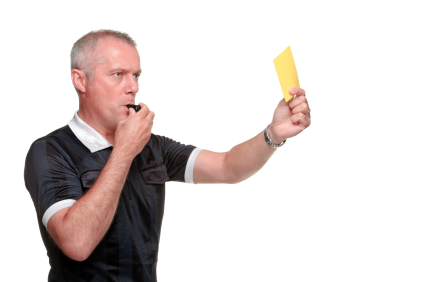 It’s time to throw the yellow flag on an unprofessional and inappropriate behavior.

You are part of an online community of professionals. One of your eCommunity colleagues comes to you and has a problem with another person.

The Accuser, The Listener And The Accused

Someone (the accuser) comes to you (the listener) to talk about another person (the accused) with whom they have a difference of opinion, a problem or a complaint. They want your advice. They need a listening ear.

The listener thinks they are helping. Ironically, the listener reinforces the problem by being a relief valve to the accuser. Then the accuser feels less compelled to deal directly with the accused.

Even worse, the listener often falls into the trap of reinforcing the accuser by heaping more blame on the accused. And worst of all, often the accused has no idea of the drama that’s unfolding.

Such indirectness turns simple conversations into major dramas. And it destroys communities.

By talking to the listener, instead of the accused, the accuser has committed a personal foul against the listener. They have created Triangulation.

Whenever we focus on something with another person other than that relationship, we create a triangle. Our focus becomes the third point in the triangle. It also becomes a bonding experience.

Triangles are very stable. Add to that triangle the pattern of blame and avoidance and you create a bond as strong as cement.

Systems thinker Edwin Friedman says, “The basic law of emotional triangles is that when any two parts of a system become uncomfortable with one another, they will ‘triangle in’ or focus upon a third person, or issue, as a way of stabilizing their own relationship with one another.”

Ultimately, triangulation is simply having an issue with someone and talking about it with somebody else. It occurs when two (or more) parties commiserate together about a third party, rather than working on their issues directly with the third party.

Triangulation also creates an us vs. them culture. Groups bond together in opposition to them. Blame and defensiveness fuels the triangulation. The pattern becomes an excuse and a crutch. It becomes a third-party offense as the listener is now also offended by the accused’s alleged actions.

When people focus their blame on them, their ability to see their own internal issues erodes.

In contrast, a systemic thinker seeks to understand how their own behavior influences other. And vice versa. A systemic thinker also throws a yellow foul flag with an accuser starts unloading accusations.

My Personal Rant About Whining And Direct Dealing

I have personally reached my limit on passive-aggressive indirection. No more whining. No more raised eyebrows. No more smug dismissals like, “Well, that’s interesting.” If I want to express myself or counter rudeness, I choose to do so directly.

Sneering and whining come from a feeling of powerlessness. And from the fear that powerlessness breeds. Thus, muttering at the water cooler, bellyaching at the bar, kvetching about overbearing others is a waste of time.

I believe in direct-dealing. Many corporate employee handbooks state so as well. It’s time for the accuser to have the courage and chutzpah to deal directly with the accused, not a third party listener. Act like an adult and you’ll be treated as such.

I think directness is a decision we each make and then steadfastly apply one day at a time. It doesn’t make the world any less annoying. But at least we are showing respect for self and other.

How can we avoid triangulation if we are the listener? What’s worked for you in helping others deal directly with those that have offended them?