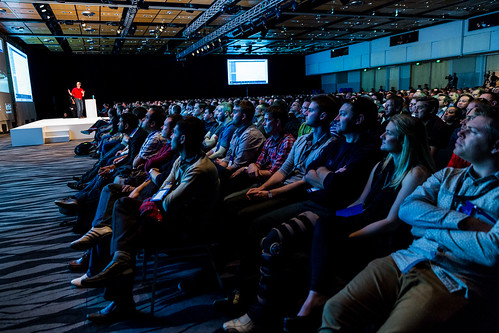 Conferences are providing inferior education if all they provide is didactic, presenter monologue lectures.

Yes, that’s right. The speaker lecture is ineffective and inferior! If all your attendees do is sit and listen passively to speakers, you’re providing bad conference education!

At least that’s what 2001 Physics Nobel Prize recipient, Stanford professor and former director for science at the White House Office of Science and Technology Policy Carl Weiman says regarding lectures. Weiman goes on to say that the public needs to know and understand that lectures are an inferior method of education. And they are just as inferior for the STEM (science, technology, engineering, mathematics and medical) groups!

The research is strong, loud and clear that lectures do not lead to learning or attitude, behavior and skill change.

A new research paper recently released in the May 2014 journal of PNAS provides compelling and convincing evidence that active learning is far superior to the lecture! Researcher Scott Freeman of the University of Washington in Seattle and his colleagues analyzed data from 225 studies about lectures and active learning. They discovered that:

In short, the lecture is ineffective says Weiman.

“A lecture is basically a talking textbook,” he adds.

Active Learning Applies To All Education

Some may read the research and say it only applies to young adults in college. Not so, says Weiman.

“The same principles of how people learn applies to all education levels,” expresses Weiman.

But conferences have been slow to make the change. The lecture is still the primary cornerstone of the conference education offering.

It is time for conference organizers to stop lecturing at their audiences!

It’s time to make the shift from primarily providing lecture-based education to offering a mix of active and passive sessions.

Why do some CEOs and conference owners refuse to acknowledge and adopt the research about the ineffectiveness of lectures? What steps do conference organizers need to take to transition to active education sessions?