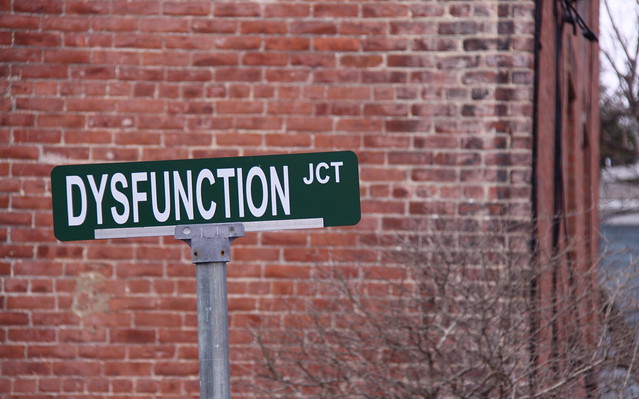 Your organization needs to change because it’s broken!

“There is no such thing as a dysfunctional organization, because every organization is perfectly aligned to achieve the results it currently gets,” says Jeff Lawrence.

The Illusion Of A Broken Organization?

So is your organization broke?

Or is it working just fine…

In reality, any organization operates today because its leadership—or those groups with the most leverage—want it that way! They want it to operate just as it is. And in their eyes, it is fine. It is not broken.

Whether you like it or not, your organization prefers its current situation to trying something new. It doesn’t want to risk new unpredictable consequences. If it did, it could lead to loss, especially for some of its key stakeholders.

Anyone who points out a dysfunction or broken part of the organization will not be popular!

There are enough people in the organization who like the situation just as it is. Or it would not be that way.

If you or your committee begin to point towards the gap in the organization’s performance and its goals, expect public humiliation. You’ll undoubtedly be branded a heretic or traitor.

The current leadership admires and believes in its process and practices. Identifying any disconnect will be seen as a problem from those who currently control the process.

Closing that gap is seen as more painful to the organization’s stakeholders than living with it!

So What Now For The Organization’s Leaders?

The organization’s highest leaders need to take courage. They need to identify what is most important to its mission and goals.

The leadership also needs to ask some difficult questions:

The organization needs leaders that will diagnose and act both towards the system and towards their own selves. (Change must first start with each of us before it can work within a system.)

Ultimately, the organization needs adaptive leadership. Not leaders that address adaptive challenges as if they were technical problems.

Your organization needs leaders that practice adaptive leadership: the art of mobilizing people to tackle tough challenges and thrive.

Sources: Adaptive Capacity: How Organizations Can Thrive In A Changing World; The Practice Of Adaptive Leadership: Tools And Tactics For Change; Leadership On The Line: Staying Alive Through The Dangers of Leading.

How does your organization distinguish technical problems from adaptive challenges? Why is adaptive leadership so difficult to identify and address?